I actually wrote this post from the cruise, but couldn’t get enough internet strength to post it, so here it is. Except I’m posting from Auckland, looking out at the Hauraki Gulf instead. Also beautiful…

Right now, at this very instant, I’m writing this update from somewhere in the South Pacific. Or the Tasman Sea. Not totally sure, but we’re on our way back to Sydney from New Caledonia, which incidentally is considered a French Overseas Territory. Maybe we’re crossing the Tropic of Cancer? Who knows. I know New Caledonia is above it and Australia is below it. So I’m surrounded by some massive body of water, sitting across from The Professor, and drinking a Marlborough Sauvignon Blanc. The girls are on the ship with their little band of friends, not making so much noise that we can hear them, so it’s all good.

This is what I’ve learned so far from our time in Australia and New Caledonia:

I don’t have a lot of pictures I can post right now – we have the very slowest internet connection known to man, but I’ll try and add a couple. No promises. But when I get back to Auckland I can post some more just to be obnoxious.

We left Auckland in the very early morning on Monday, the 4th of October. Flew to Sydney and just walked around the first day. We were staying in Old Sydney, which has a lot of charm and is right near Circle Quay (where both Harbour Bridge and the Opera House are), so the views are pretty spectacular and what you would hope for in Sydney. The girls were THRILLED with the hotel since it had a TV – they mostly just wanted to watch all the Teen Disney they’ve been missing. Mark and I let them for a while and we went to a German restaurant right next to the hotel and quite enjoyed some German beer, sausages, and kraut.

We spent the rest of the afternoon in the hotel pool (on our hotel roof) looking at the Harbour Bridge and the Opera House. Later that afternoon, we met a friend of mine from high school who’s been living in Sydney for the past five years. It was fun to catch up with Kori, meet her husband, and hear about their experiences and adventures of living abroad. A lot of details and some inconveniences for sure, but still something I’d be interested in pursuing at some point on a more permanent basis… Not totally sure if The Professor knows just how serious I am about this or not.

Tuesday we took a very slow and thorough harbor cruise in the morning. It was longer than I think we were expecting, but most of us enjoyed it and learning a little bit more about Sydney and the surrounding areas.

It eventually dropped us off in Darling Harbour (where Nemo ended up in the dentist’s fish tank) and we went to the Aquarium and a zoo. Not the main Sydney zoo, but one that had enough animals, koalas, and kangaroos to keep it interesting.  The Aquarium had a lot of fish (obviously) and some pretty cool creatures. My favorite was the dugong. It’s a cousin of the manatee and looks a little bit lit like a beluga whale – at least in its sweet face.

Met a college friend of mine for drinks that night, and it was fun to reconnect with Erik after 25ish years.

Wednesday was the day we boarded the ship. Our departure was delayed by about 90 minutes, but I didn’t think anything of it. Until The Professor bravely admitted it was because the ship had had a higher-than-normal outbreak of the Norovirus on the last sailing. AWWWWWWESOME. I say he ‘bravely’ admitted it, because ever since we booked this cruise, I’ve been snarkily talking about an outbreak of it. And he’d look at me cross-eyed and ask why I keep saying that. I’m sure I did sound like a jerk, but it’s a “School Holidays” cruise, which just means heaps of kids. Which means heaps of dirtier people. I figured there could really only be one outcome. Norovirus. When he told me the reason, I had to reassure him that even though I wish I were that powerful, I did NOT actually cause the outbreak. So that was exciting news to get before we got on our floating home for the next eight days…

We walked around the Botanical Gardens that morning, which was cool. There’s a great footpath that takes you right along the water. There were a bunch of runners and other people enjoying the views and weather. At one point we stopped for a snack, because the girls were STARVING. Found a little snack bar with a seating area in front of it, directly across from the Opera House. It was sunny and warm, with just the right breeze. Sitting there with Mark, drinking a beer, looking at the view, watching the girls huddle together, I was struck yet again by how lucky we are. It was a moment for sure. 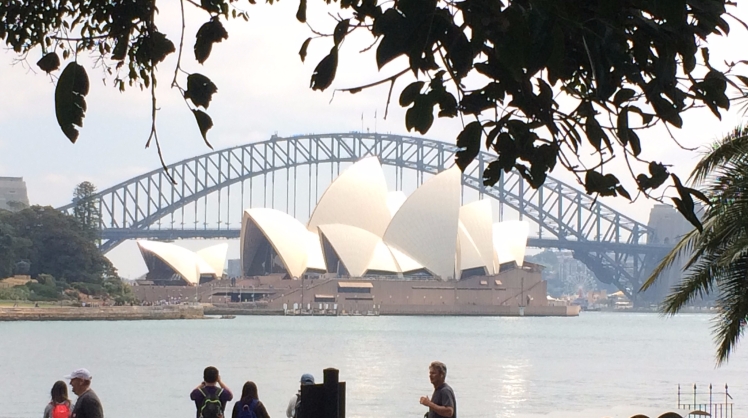 We finally boarded the Pacific Explorer and have barely seen the girls since. The ship left from Circle Quay, so directly across from the Opera House. We backed out of the berth towards the Harbour Bridge, then began our journey forward and northeast. It was honestly one of the most surreal moments of my life. Leaving on a cruise to New Caledonia. From Sydney. While we’re living in Auckland. I mean, WHO DOES THAT?! It was crazy. And awesome.

There are kids clubs on board, though the girls are in different ones due to their ages. They’ve got the ability to check themselves in and out on their own and have really been doing their own thing since we boarded. Gracie’s found a group of friends who are OK with Tate tagging along, so they’ve all been having fun together.

We were at sea for the first two days. The girls swam one day, did some activities another day (the Mechanical Bull and Flying Fox), and have just been running around since then. I think. We haven’t seen too much of them… 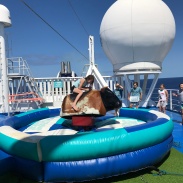 The first day in New Caledonia was at Isle of Pines. Beautiful island full of, wait for it… Pine Trees. Which are not what you may expect in this part of the world. And that’s maybe what makes it so pretty. Well, that and the water. And the sky. Our excursion was a boat ride to the world’s largest lagoon where we found some loggerhead turtles and were able to swim with them. Truth be told, it really seemed like the turtles had some sort of understanding with each other – like one turtle drew the short straw and was “it” for the day and had to take his turn to get ‘caught.’ All the other turtles hightailed it out of there when the boats started circling… So the guide grabbed the unlucky turtle – gently, but grabbed him nonetheless – and took him around for people to see. I think people were allowed to touch it – I didn’t, but Mark and the girls did. Then we got back in the boat and went over to a beach where we hung out for about 45 minutes. Beautiful views, amazingly clear water. 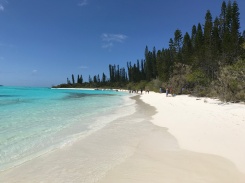 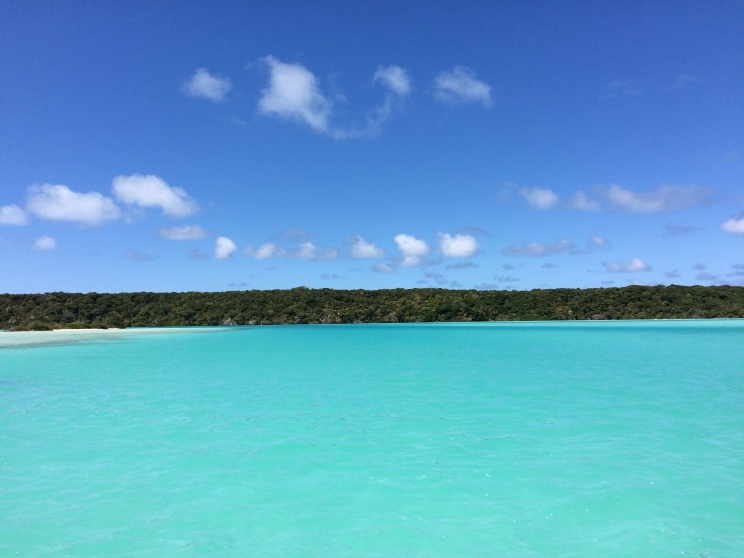 The second day in New Caledonia, we were in Noumea, the capital city and on the Grand Terre, or the mainland of the country. Our excursion this day was snorkeling in a UNESCO Marine Reserve. Turns out New Caledonia’s Great Barrier Reef is the longest in the world. And still VERY healthy. Some people on our tour had also snorkeled at Australia’s and said you could see where it’s dying. This coral was very colorful and supported all sorts of amazingly colorful fish, which is probably the best indicator of how healthy the coral is. We saw three sharks (Gracie, who is apparently part mermaid, saw five!), a few turtles, and heaps of fish. Except for poor Tate who was freezing – she claims she only saw two fish, which is weird, because if you opened your eyes at all, they were everywhere. She was legit freezing, though. Her wetsuit was two pieces, didn’t cover her long torso all the way, and the poor girl doesn’t have any fat to keep her warm. She was UNHAPPY (which is always a total blast), so I held her hand for the 30-minute swim out and most of the 30-minute swim back to the boat. She was actually shivering, so then I felt bad for my impatience. But I digress. The fish were amazing and it was seriously the coolest snorkeling I’ve ever done. Gracie blew me away and would just take off and dive down to get closer to something. Really looking a little bit like a mermaid. It was great to see – love watching these girls grow up.

The third day in New Caledonia, they shuttled us to a beach. That was it. Just a very pretty beach. Mark brought his snorkeling gear and found some fish and Gracie and Tate put on their goggles and went out with him. I just soaked up some more sun. And then enjoyed a nice cold beer.

Two more days at sea (including today), then back to Sydney for a day, and then home to Auckland. We get home Friday evening and the girls will begin 4th quarter on Monday. SO hard to believe that we’re right around the half-way mark of the trip.

From New Caledonia to Sydney, you must sail to the west, so here we are LITERALLY sailing off into the sunset! 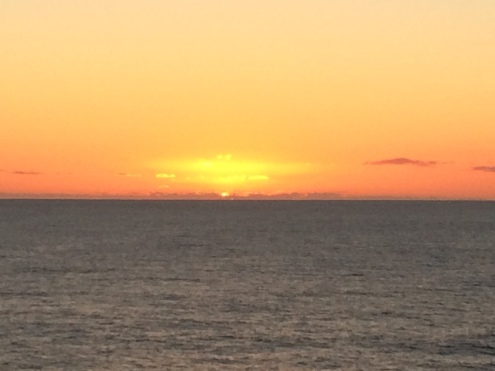 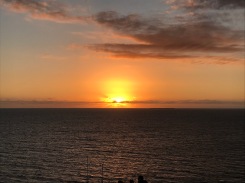 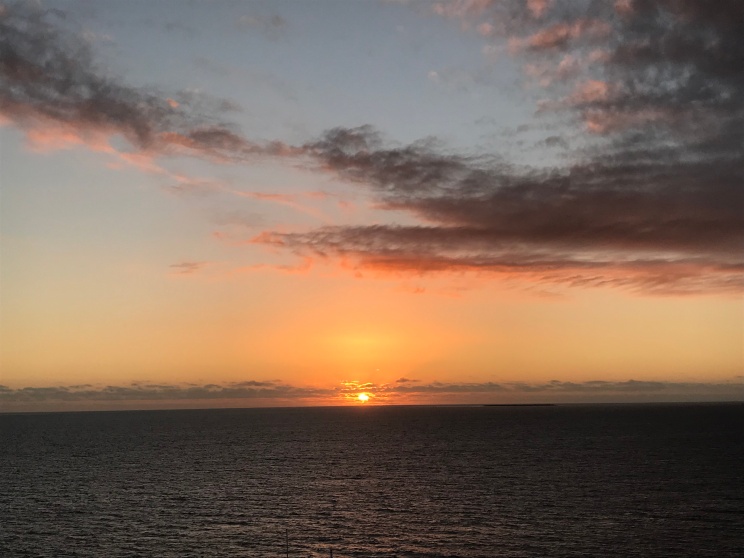 Another couple random shots of various parts of the trip. Then home to Auckland for a short fourth quarter. Then home home to Columbia for the foreseeable future… 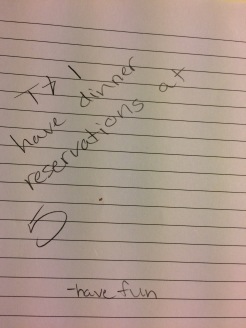 2 thoughts on “Australia and New Caledonia”