Last Saturday, we went to the Rugby match to see the New Zealand All Blacks (#1 in the world) play the South Africa Springboks (#3). It was epic! Rugby is the national sport of my favorite island nation, and people are into it. We took the bus up to the stadium, and it was a typical pre-game atmosphere. Lots of spirit, some smack-talk between the two fans, but really fun. People were MUCH better behaved – and much more sober – on the bus than I think they would’ve been going to a football game at home. We got there a little bit early, walked around a bit and just watched the people, which was so fun. The girls each got a bag of doughnuts from a food truck and thought that would be the best part of the night.

The stadium had apparently added extra seating and could accommodate the sold-out crowd of about 30,000 people, so it was a nice, intimate setting – certainly smaller than college football games! The All Blacks (ABs) are the national rugby team, made up of players from the different regional teams, so the games move around the country. We were really lucky that this one – the last time they play in NZ this year – was here in Auckland.

Before every match, the ABs perform the haka, a traditional Maori war dance. It’s meant to be a display of a tribe’s ferocity, pride, strength and unity. We’ve seen several done as performances – usually at cultural or educational events. And while I understand the warrior nations that the Maori were and what the haka is meant to communicate (particularly to strangers or the known enemy), every time we’ve seen a haka, it’s been a performance. I’ve watched the AB haka on YouTube before and not really given them a second thought. I was still thinking of them as a performance. But.

When these guys did the haka on Saturday night, every single hair on the back of my neck stood up, and I was afraid to breathe. It was one of the most intense displays of anything I’ve ever seen. Here’s a picture I found on the All Blacks Facebook page of it. 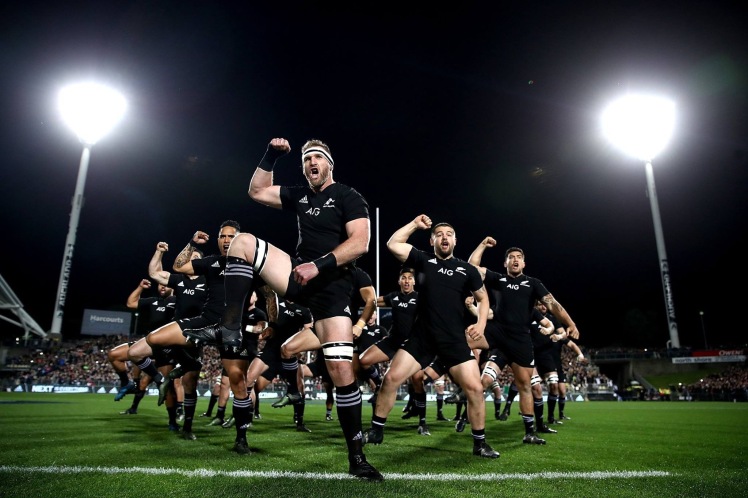 Not seeing it live, you’re just kind of like, “Oh, there’s some big, bad ass rugby dudes stomping around showing how tough they are.” But to be there live and feel the energy and witness the intensity… I do not have words. But it was amazing to see and hear and feel. Tate is taking Maori at school and has learned a haka and some other Polynesian dances, and she was mesmerized, too. It will go down as one of the coolest things I’ve ever seen.

And the All Blacks killed it that night – beat South Africa 57-0. Our seats were behind the goalpost and in the first half, it was where the ABs scored. Which was really cool, because we got to see the plays spread out on the pitch (the field) in front of us, which I think helped us follow the match. There is still a lot about the sport and the game that we didn’t fully get, but our view helped us appreciate the precision and skill involved. It was so fun and such a great game. There were a lot of Springboks fans around us, because there is a large South African expat community up where the game was, but everyone was friendly and excited to be there. Much more civilized than some American sporting events. 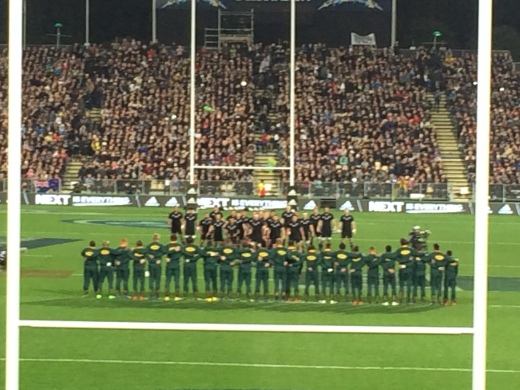 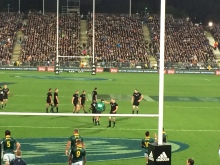 But then the streaker showed up. And Tate started asking questions: Has this guy just been walking around naked all night? Why would he do that? Why is everyone laughing? Isn’t he cold? So we talked about streaking for a bit and tried to make her believe that it is NEVER a good idea to run anywhere naked. Fingers crossed it sticks. 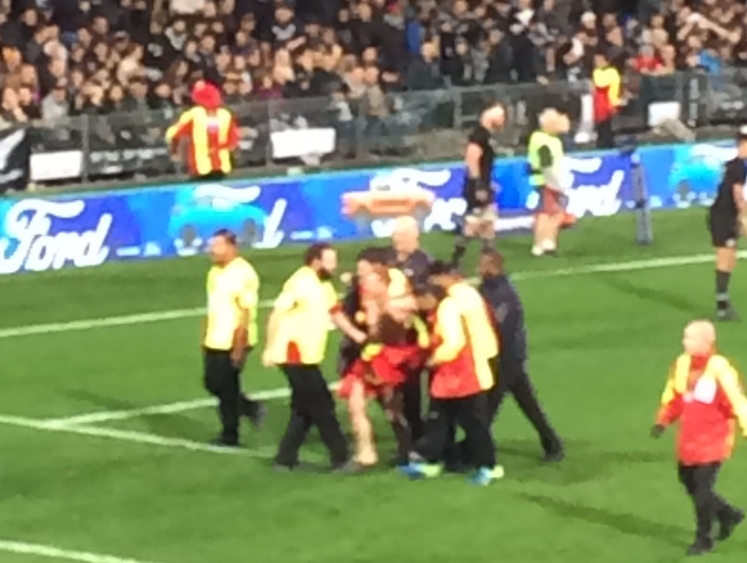 And then to make it even more fun than just your run-of-the-mill streaker, the stadium did the wave. It was the first time the girls had ever seen one or been part of one – they loved it and giggled every single time it came around. Which I thought was about four times too many.

I didn’t even know an All Blacks rugby test match was on my Bucket List, but apparently it was. And it was such a fun night – the girls were screaming their little faces off every time the ABs scored a try – it was fun to see their excitement. Gracie is going to play Touch Rugby starting in October, so maybe that’s why she was so excited – picking up some pointers?

The Professor and I played tennis yesterday for the first time since we’ve been here. There is a lawn tennis club right around the corner from us (sponsored by champagne – seriously – look closely at the sign!), which we’d talked about joining. 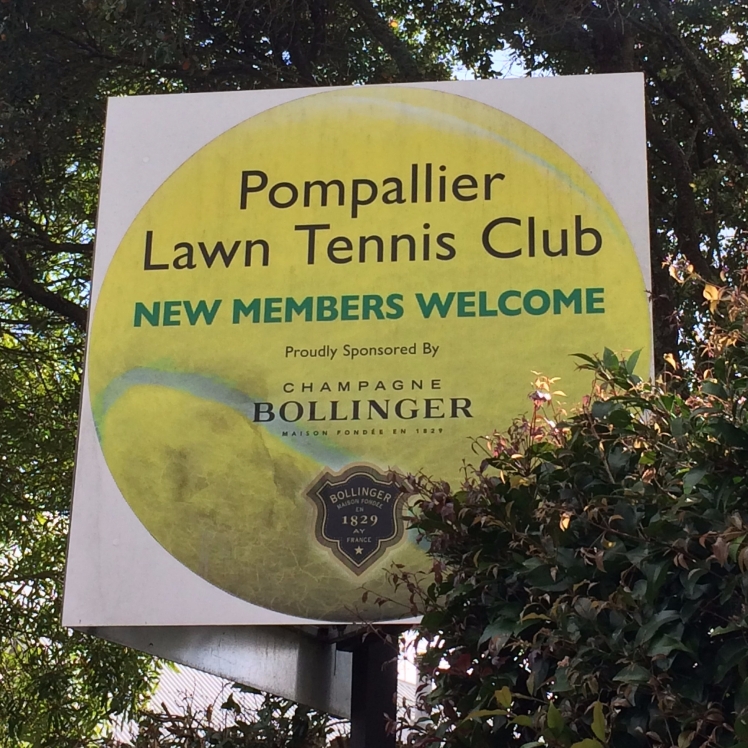 How fun would that have been? But then they never got back to us or something, so we ended up not joining, and now it wouldn’t make sense. So we played on some public courts yesterday – decidedly *not* sponsored by champagne… 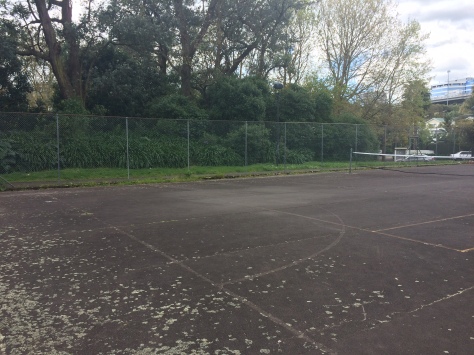 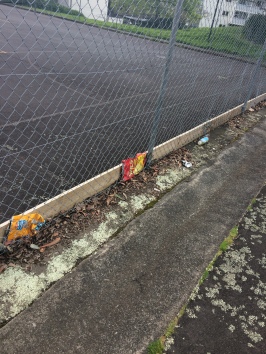 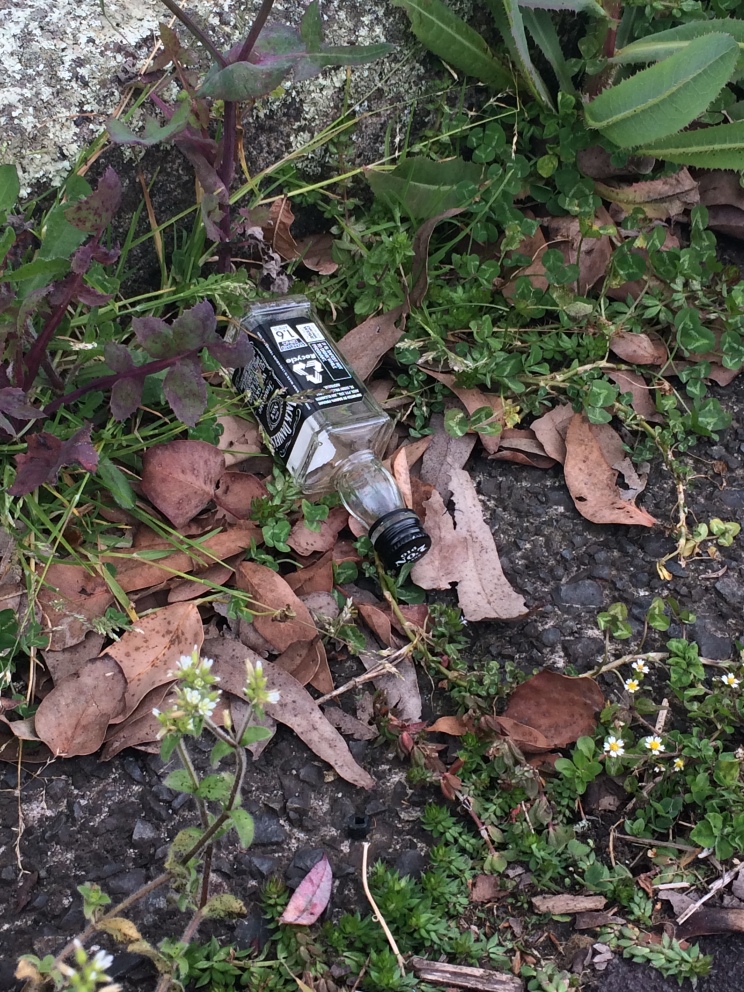 But it was fun to get out there and run around. The Professor even said he thinks it’s the best he’s seen me hit. Must have something to do with the gravity here in the Southern Hemisphere?

We lunched at a cool little restaurant in an alley (although the alley is called The Lane), with a bunch of cafes. Fun vibe and a beautiful day, and time with The Professor is always the best. 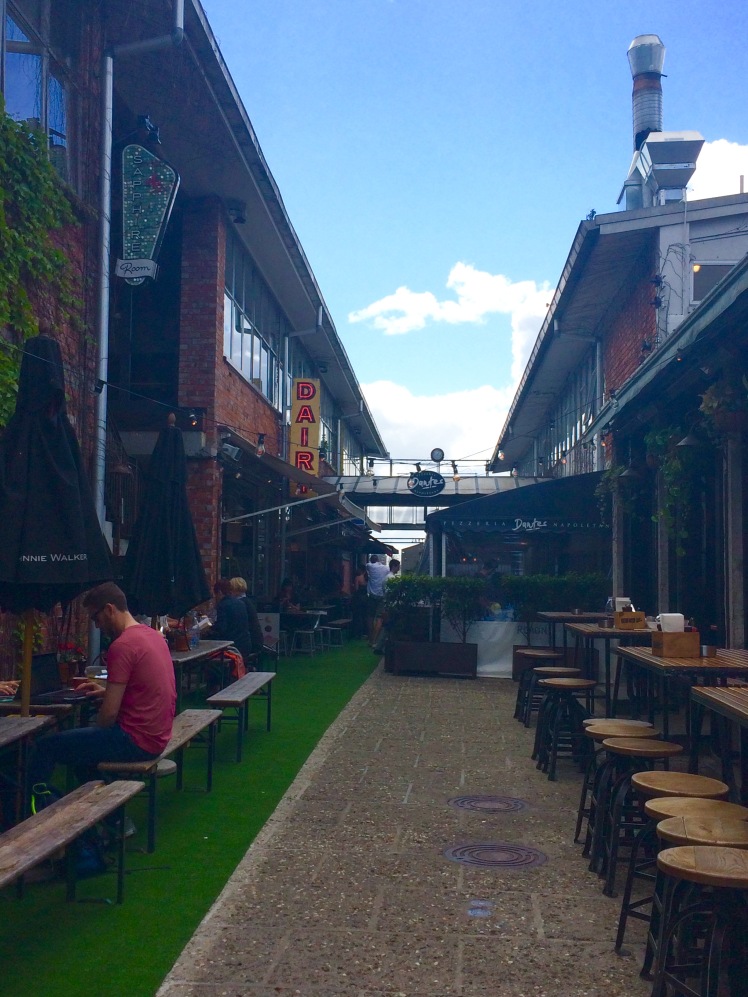 We may have wine in the park on Friday afternoon with some friends, are hosting some friends for dinner on Saturday night, and may try out a new brunch place on Sunday, so a fun weekend ahead. And at some point, I really will get my resume updated…

One thought on “The Mighty All Blacks!”