So we’ve arrived! About 3 days ago and I’d started one post, but got called away in the middle of it and when I went back to read it just now, it’s already old news – things move fast on the other side of the planet! Not really, but we’ve been crazy busy getting settled. So to recap:

When the flight touched down in Auckland, we all four looked at each other and the thought of, “Oh sh!t – what have we done?” was on everyone’s face. But a quick family cheer (we all put our hands in the middle and on three yell, “FERGU-KIWIS!”) got us right and away we went! Mostly because we had no choice – we were here so what else could we do?

To put everything in perspective, this is my view at this very instant:

Amazing, right? It helps! We’re having a great week of weather, following a week of horrid weather last week. But it’s made the transition a lot easier – I’m not going to lie. Maybe now when the winter rains set in, the girls will remember these beautiful days and think the rain is the anomaly.

Our house is beautiful – large (with great views!) so everyone has their own space. It’s got a beautiful covered terrace on the second (of three) floors, where we’ve already enjoyed coffee during the sunrise. And wine while FaceTiming my family while they’re at the beach. Here’s the sunrise on our second day: 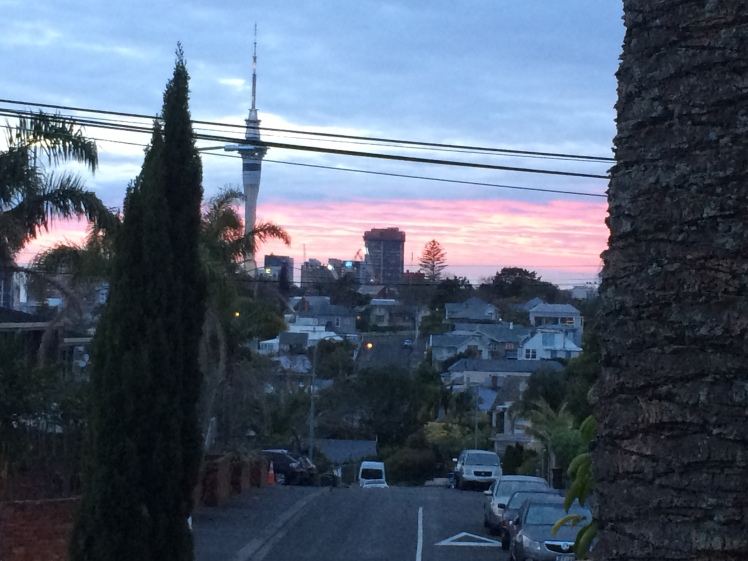 For realz, people – that’s what we saw. I’m sure loneliness and frustration will hit us at some point, but the views are always going to make it better.

Yesterday was such a fun, local day. We walked to Tate’s school – about an 18 minute walk, looked around and on the way back, stopped by a great little cafe for lunch. Our waitress is an alumna of Gracie’s school and told her how she also moved to NZ during Year 7 and assured her she’d love it. Then we walked over to Gracie’s school – about 10 minutes in the opposite direction and poked around there. Here are some pictures of that. If you click on the picture, it will tell you what you’re looking at. 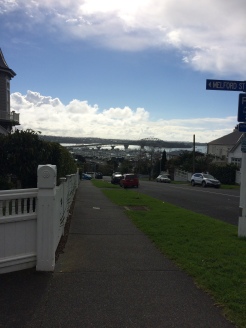 The view on the way to Gracie’s school

The view from some fields at Gracie’s school. The Sky Tower is the centerpiece of the Auckland skyline, so that’s why it’s in all the pictures!

On the way back from Gracie’s school, we ran into someone we know. Yes, you read that correctly. WE RAN INTO SOMEONE WE KNOW. We know a grand total of FOUR people in this city of 1.4 million people and we ran into 25% of them on the street yesterday. WHICH WAS SO FUN! Made it seem like home. Even the girls were kind of impressed by that! How we know Karen is kind of convoluted – and we don’t know her well. Mark and I have met her once (ONCE!) while we were having lunch with someone who grew up in Auckland (Lucy) who met one of my besties (Jen) at a dinner party in June in Atlanta. Lucy’s parents, who live in Auckland, were in Atlanta at the same time we were there to pick up the girls from camp, so she was kind enough to host us to meet them. And there we met Karen, who has just returned to NZ after living in NYC for years. And she was walking down a street three blocks from our new home. AND – if that’s not enough – Karen was with a woman who knows my former teacher (Fr. Walls, a kiwi priest who taught me in Atlanta in 1982/83). So New Zealand shrunk a lot for us yesterday!

After that bit of fun, we stopped by a great little coffee shop that Gracie is now VERY excited to walk past every day and grabbed a sweet treat. Later, we needed to make a run to a Target/Big Lots-type store to pick up random things we need around the house. So the Ferguson Four hopped on a bus and went across town. I’m sure we looked like the Griswolds traipsing through the streets of Auckland with our hangers, hampers, and toothbrush holders. Ordered pizza for dinner from a delicious pizza place not far from here and then even placed an online order for groceries to be delivered. Wasn’t sure how that would turn out, because you order by weight – kilograms to be exact. And I’m not totally sure how to order tomatoes by (kilo)grams. Or chicken drumsticks. So I was afraid that we’d end up getting two chicken drumsticks and 28 tomatoes. But it turned out OK – we did end up with five bulbs of garlic, which may be four too many, but other than that, it all worked out.

We don’t have a car here and not sure if we’ll try to get one, so sorting out how to live without one when we’re so dependent on one at home will be interesting. Grocery shopping, getting to the gym, basic errands – we’ll see how they go.

And we’re even having our first house guest tonight! Fr. Walls, who lives in Wellington but had business a couple hours north of there, is driving all the way up to us to scope out the new digs. Will be fun to see him and share this new adventure with him.

So that’s our first 3 days in a nutshell. We go back to Tate’s school to meet with her principal tomorrow and will need to get uniforms and books/school supplies for both girls. And then I think all the boxes will have been checked. Or at least are in the process of getting checked.

I’ve even got to go get my second load of clothes out of the dryer – see? We’re right at home.