The first day has come and gone (and we’re, in fact, leaving for our second day in about 15minutes) and their days were GREAT.

Tate gets out first at 3pm, so both Mark and I walked down to get her. It’s a sweet pick up process, reminds me of picking up at the preschool. All the parents gather in the courtyard in the middle of the buildings and when the bell rings, the kids come piling out. Tate came out smiling, walking with 3 other girls. As soon as she saw us, she came running up and gave us great big hugs. And while that was happening, a couple kids were shouting out goodbyes to her. Mark had to hustle off to go get Gracie, who we *thought* was dismissed at 3:30, and as he was leaving, Tate called over a new friend, Kate, to introduce him to her. We’ve got a Tate/Kate combo at home, so although I miss that little Kathleen to bits, it’s nice that there’s some familiarity here, even in name only. I even met the Room Mother, who, OF COURSE, took down my email and said she’d be in touch for opportunities to help out.

We’d agreed to meet at our new favorite cafe, Mary’s, for the family debrief. While we were on our way, Tate talked nonstop about her day, and it was all good. There was no lingering anxiety or apprehension and she felt confident about the school work. Her teacher seems lovely and everyone’s willing to work with her, depending on where she is level-wise, since they started 3rd quarter yesterday. So while Tate is chattering away, we start seeing a bunch of St. Mary’s girls walking home… Uh oh.

Turns out that Gracie actually gets dismissed at 3:15, NOT 3:30. Oops. Mark found her sitting in the office looking all forlorn. They came to Mary’s and Gracie walked in with a HUGE smile, gave me a hug, and started telling me about her new friends, Isabella, Liv, and some others whose names she can’t remember. She knew all the fraction answers in Math, she gets to take French instead of Chinese, the lunch she bought was delicious, her friends are so nice, and everyone looked out for her making sure someone was there to take her to her next class.

I could literally feel my tension and worry and anxiety leave my body during her recap. It was done. The scariest part, that had the potential to ruin this six months, turned out to be fine. I know we’ll have rough days, but they’ll be normal rough days like we have at home – they won’t be rough days because they hate their NZ schools. Everyone exhale a huuuuuuuuge sigh of relief.

And here’s proof. Yesterday there were protests about the thought of pictures, today there was agreeable posing. 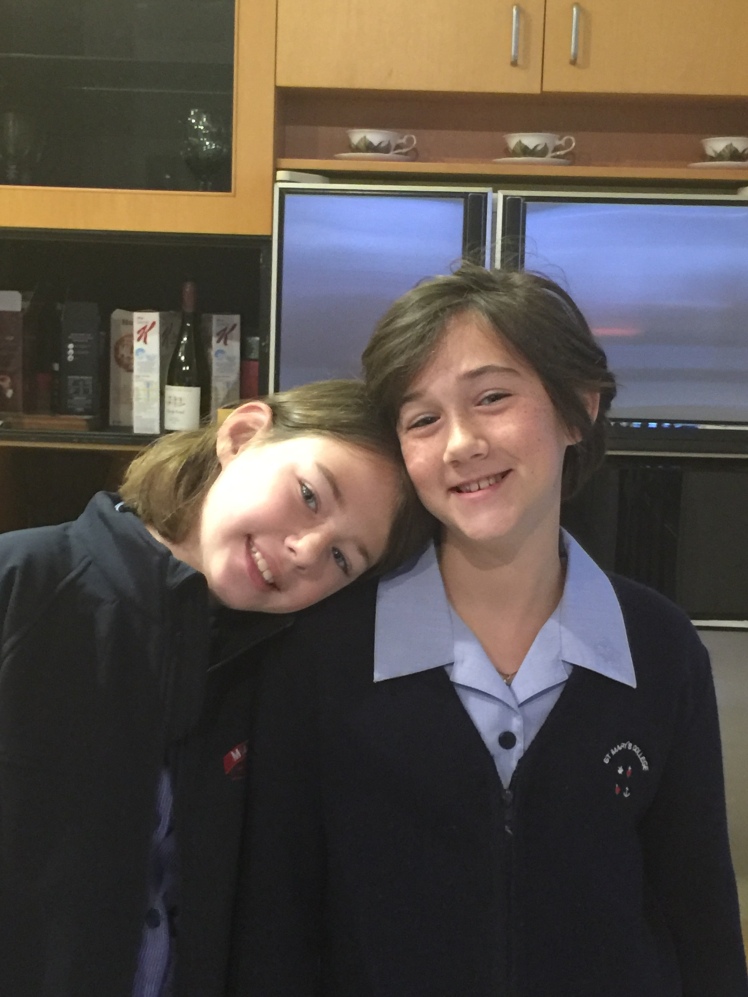 5 thoughts on “And we have a winner!”